I first met Mickey Fisher back in September of 2014. We were both scheduled to speak at the Cincinnati Film Festival‘s screenwriting panel. Mickey, however, was scheduled a few hours before me. Usually when I’m speaking at a film festival, I use the time before my slot to network, exchange information, and form new industry relationships. But with Mickey, that all changed. I found myself fascinated by his amazing story, and how over night, through a screenplay contest, his life changed drastically. Still to this day, I can’t figure out why I would be scheduled after Mickey; who in the world would want to listen to ME after hearing Mickey speak first!

So who is Mickey Fisher? Mickey is a native of Ohio, who is the writer and creator of the popular CBS series, EXTANT, staring Hale Berry, and executive produced by Stephen Spielberg. Need I say more?

But what makes Mickey’s story even more inspiring? He was discovered (and so was EXTANT) through a screenplay contest (trackingb)!

So I caught up with Mickey, who is one the nicest people you will ever meet, and asked him for an interview. For those who don’t know, I’m the Screenplay Contest Director for this year’s Cincinnati Film Festival (Screenwriting Staffing is the official sponsor). That’s why I thought it would be fitting to have Mickey share his thoughts on screenwriting contests on ‘The Backstory’! 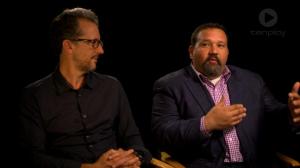 Screenwriting Staffing: What is your overall thoughts and opinions on screenplay contests?

Mickey Fisher: A contest led me to having my own show on CBS so of course I’m a bit biased, but I think for someone who is outside the industry like I was, they’re a great way to get your material into the right hands.  Even the ones I didn’t win paid off in some way.  I was a semi-finalist in the Nicholl Fellowship back in 2006 and even though I didn’t win, a student in a graduate producing program tracked me down and asked to use my script for her thesis project, which led to a friendship and professional relationship that exists to this day.

She was one of the first real champions of my writing and I think that’s what contests offer: the opportunity to make fans of your work.

Screenwriting Staffing: What should EVERY screenwriter look for when choosing and submitting to screenplay contests?

Mickey Fisher: You have to do your research and find out which ones are really kicking off careers or opening doors for people.  When I entered the TrackingB TV Pilot contest I had been reading about it for a year or two and knew that it was a viable option for getting scripts in the hands of people who could do something with them.  Shortly before I was a finalist there I won a contest held by The Writer’s Store and I entered because I knew one of the prizes was a lunch meeting with Susannah Grant.  I had read about The Nicholl Fellowship for years before I entered that back in 2006.  Now there’s The Blacklist website, which isn’t a contest, but it’s got a real track record for launching writers.

Screenwriting Staffing: Briefly, can you explain to our readers how ONE screenplay contest changed your ENTIRE career?

Mickey Fisher: In early March 2013, I was a guy who was living in Orange County and knew very few people in the industry. I entered my spec tv pilot EXTANT into the TrackingB TV Pilot Contest and a few weeks later I got a call from the contest organizer saying I was a finalist and they were working to get my script to some agents and managers.  A few days later I got an excited phone call from Brooklyn Weaver at Energy who said:

“There are no guarantees because that’s how this business is, but I think I can change your life with this script.”

Again, I’d done my research on Brooklyn, I’d seen his name on the Scoggins Report many times, so I knew he really might be able to pull it off.  He started sending it around and two weeks later I signed with WME.  The very next day, the folks at WME said:

“This show about aliens and robots, we think we should send it to Steven Spielberg.”

I was shellshocked but I managed to say, “That sounds great.”  And luckily he and the folks who run his company responded to it so we hired a showrunner named Greg Walker and by the end of July we were pitching it to nine different places before we ultimately sold it straight to series at CBS, on my 40th birthday.  It’s been a blur ever since. 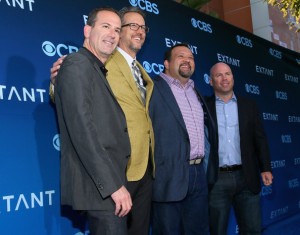 Screenwriting Staffing: How important was Gravity’s success, popularity, and profits when making Extant? Would you encourage newer (or even veteran) writers to write what’s CURRENTLY popular in Hollywood?

Mickey Fisher: GRAVITY came out after we had just started the writers room and the hype had all died down by the time we premiered nine months or so later, so I’m not sure how much it helped us.  I think more than anything it just let us know that you could get people in the tent for something like this.  It was inspiring to me personally as a storyteller because I felt like we had tapped into a similar vein.  But I wouldn’t encourage anyone to write what’s currently popular.  I think by the time you finish that thing isn’t going to be popular anymore, except for zombies which seem to have no expiration date.  I think the best thing you can do is write the thing you really want to watch and trust that if you think it’s cool someone else will too.

Screenwriting Staffing: You mentioned earlier in your career that you “shortchanged” your female characters, which created a negative impact on your stories. When did you finally start incorporating extraordinary FEMALE characters with even more extraordinary conflicts (like Extant) into your screenplays? Can you walk us through some of the hurdles and challenges you faced, seeing that you are a male writer?

Mickey Fisher: I had written a series of scripts where the biggest female character was the nagging wife who was worried about the hero husband, or the ten thousandth manic pixie dream girl, rather than three dimensional characters.

I thought about all the great actresses that I know (my girlfriend being one) and realized how little I was really giving an actress to play.

It had been easier to put myself in my male character’s shoes and imagine myself as the actor playing them, so that’s who got all the good lines and the meaty action.  I made it a challenge to write a series of complex, cool, compelling female leads and it’s something I’m still challenging myself to do. 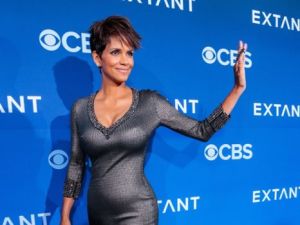 Screenwriting Staffing: Would you say some of the best “stories” today are on TV rather than film? And if so, why?

Mickey Fisher: I would say some of the best drama, period, is on tv, rather than film and even theater.  I think the range of movies most studios are able to make right now is fairly narrow.  It’s all comic book movies, remakes of stuff that’s already been done or things that have a branded IP like Legos or Transformers.  That’s not a knock on that stuff because I love those movies and hope to write some of them myself.  But it’s just the economic reality.

Whereas in tv, there are more buyers than ever looking for content, which leads to more opportunities for a wider range of material.

Screenwriting Staffing: On the surface, your story takes places in space, your lead is an astronaut, and incorporates aliens and robots. For most of us – and that includes myself – these aren’t typical topics or experiences we are well-versed in. But after reading an interview from Hale Berry, she credits her immediate interest in your project – and its success – was largely due to how you incorporate human emotions and feelings… for instance: What makes us human? How do we deal with our fears? Are we alone in this universe? What advice can you give to screenwriters when making our “not-so-human” characters….well, human?

Mickey Fisher: I think a lot of people talk about a writer’s “voice.”  It’s a hard thing to quantify or even explain but to me, I think you find your voice when you’re writing the thing you would really want to watch and informing it with all of your hopes, fears, dreams, desires and more.  I was writing about aliens and robots but I was also questioning my own existence.

Do I believe I’m just a collection of my information and experience or do I believe I have a soul?  Is there something after this?

I think that’s the “write what you know” part of it.  There’s a line in Self-Reliance, that Emerson essay that says something to the effect of, “Speak what is true to you and trust that it’s true for all men.”  I think if you do that in your writing other people will connect to it. 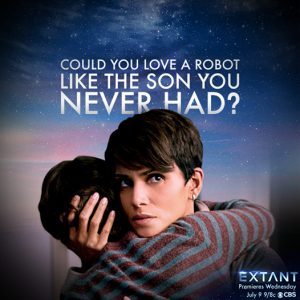 Screenwriting Staffing: Would you say studios (especially in TV) favor sci-fi over other dramas? If so, why?

Mickey Fisher: I’m not sure.  I do think there’s a great wave of interesting sci-fi fare these days and I’m just glad we’re a part of it.

Screenwriting Staffing: Lastly, you had mentioned when we spoke back in September that you had to “give up” some creative control. You credited this partially to your “lack of TV credits” and being a “newbie” in some people’s eyes. Yet, many writers can and will NOT give up creative “say”. What advice/suggestion would you give  to those “unproduced” writers?

Mickey Fisher: Some people might look at it as “giving up creative control,” but I prefer to think of it as collaboration.  TV is a team sport, for the most part.  Most shows have a showrunner and a writing staff and then you have producing partners and studio and network partners.  Beyond that, you have directors, designers, actors, all of whom are going to have experience and if they give a damn they’re going to have an opinion.

If you’re rigid about having control or have a “my way or the highway” attitude then you’re really not open to the best ideas and that’s harmful to the show.

We have a “best idea wins” policy, and I think that only helps.  I’m not the showrunner, I’m just the creator so I don’t have final say on anything yet.  But I hope if I’m ever lucky enough to get to that position on some future show, I’ll always be able to articulate a strong vision and then be open to any idea that improves on it, no matter who it comes from.  Like Bruce Lee said, “Be like water.”

iThere are no comments

Begin typing your search above and press return to search. Press Esc to cancel.